In the middle of one of the most visited public parks in Amsterdam, we’ve built a brand-new temporary museum,

Unfair™ Westerpark is the second installment of our temporary museum series. 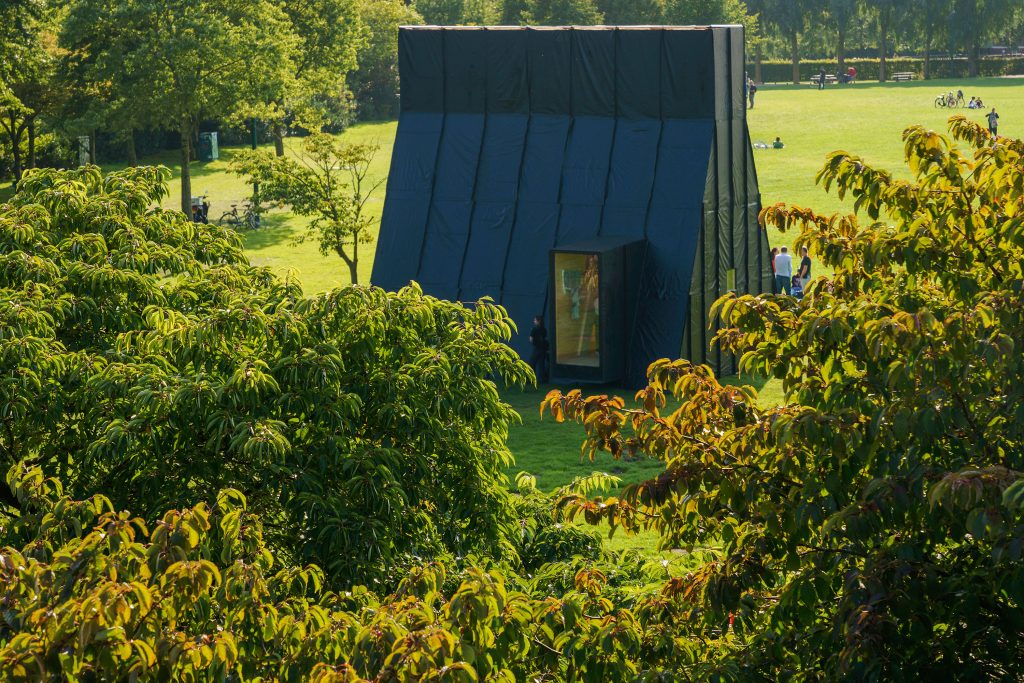 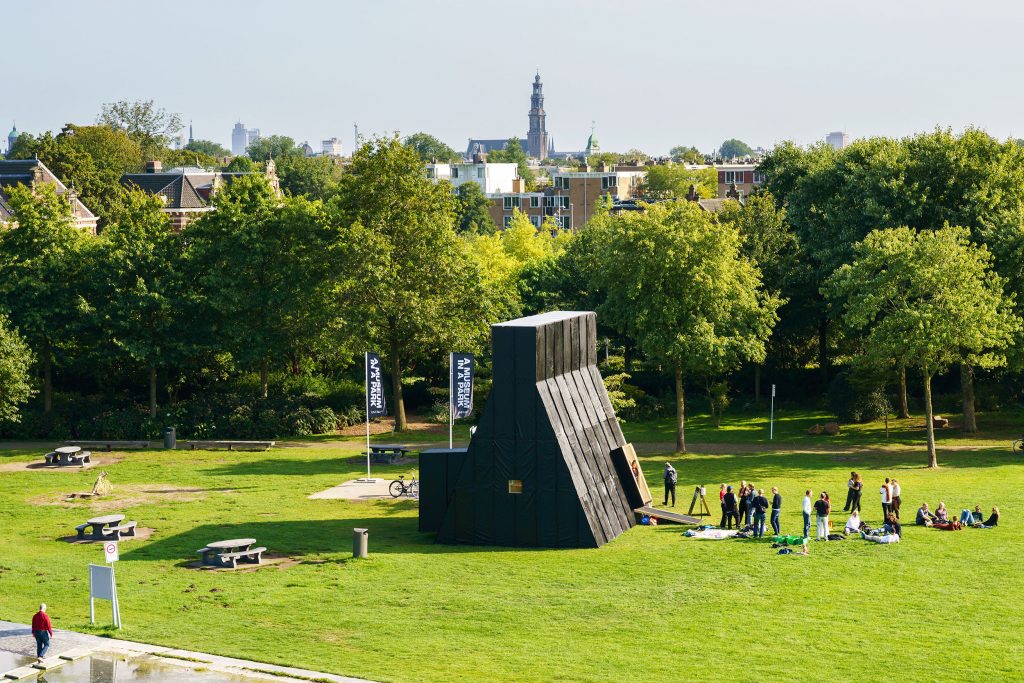 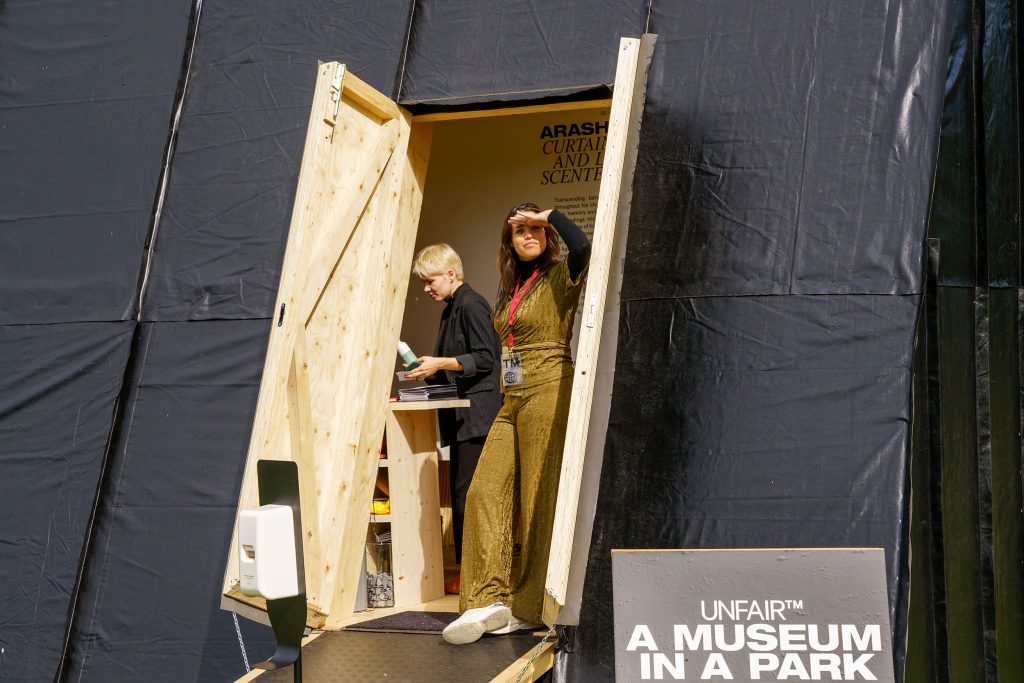 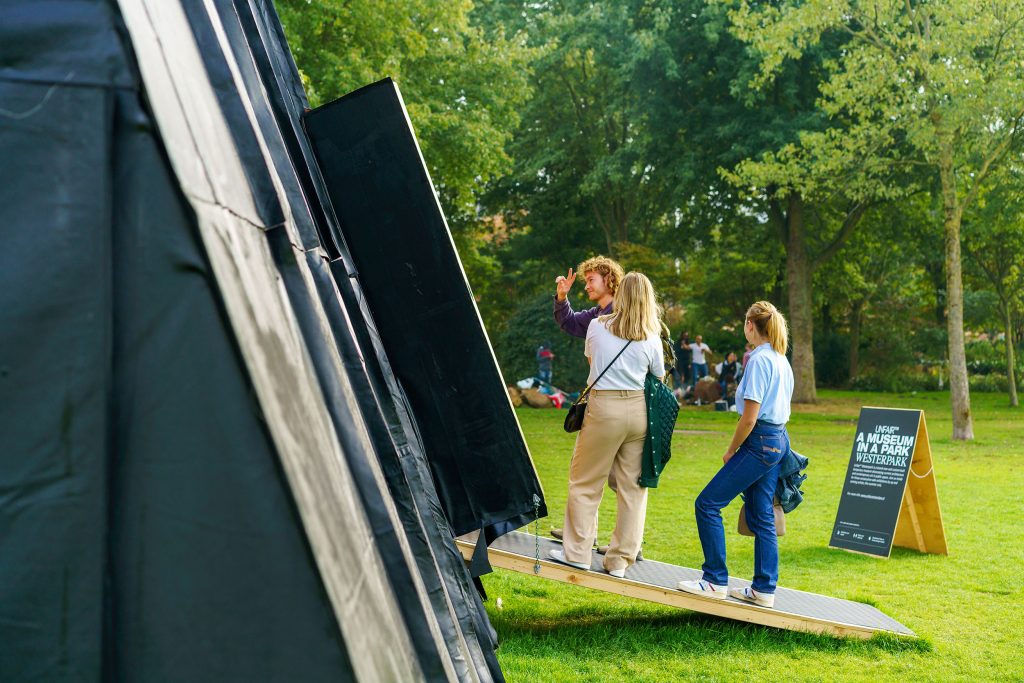 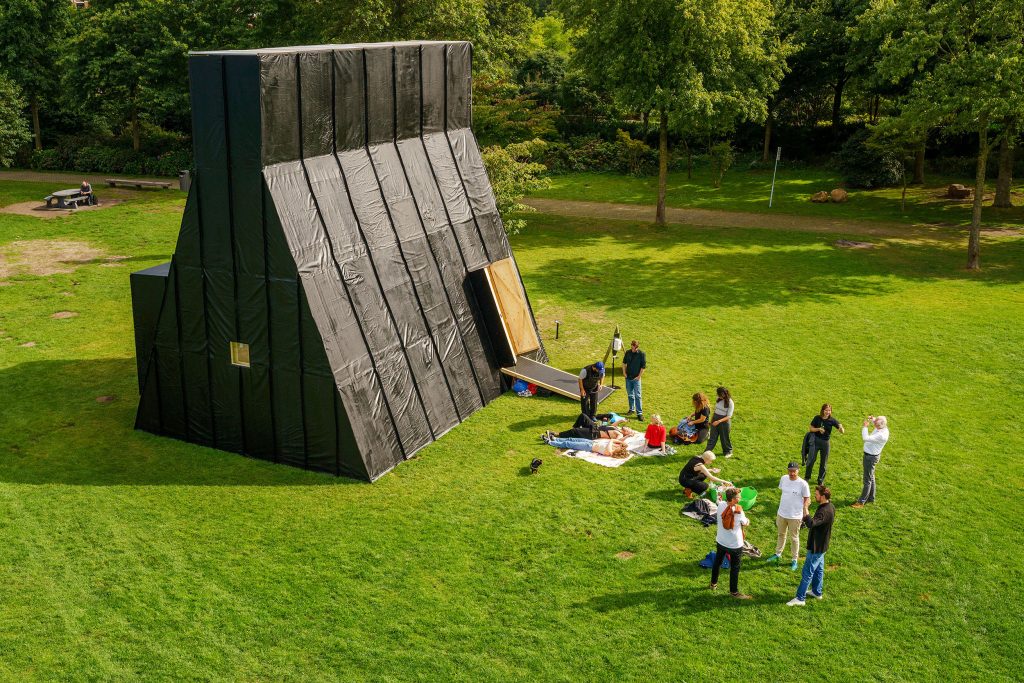 Unfair firmly believes art deserves a grand stage. This year, for the first time, Unfair built this podium from the ground up. The pavilion, designed by architect Tomas Dirrix, was a celebration of art and architecture in public space. With different glimpses on the park, the design balanced nature and culture, bringing together the public park and a white cube – the standard for exhibition spaces in contemporary visual art. Thus the museum itself could be considered one of the biggest piece of public art in Amsterdam, making Unfair™ Westerpark a unique monumental cultural production.

Unfair’s Temporary Museums are artist-centered, inviting makers to take a central position in the art community and tell their own stories. This means Unfair presents solo-exhibitions, curated by the artist, where you can discover new works and buy them directly from the maker. Connecting you, whether you are a passer-by, art professional or collector, with up and coming contemporary artists in an inviting and up close and personal manner.

Three consecutive solo-exhibitions by up and coming contemporary artists.

Iriée Zamblé draws her inspiration from daily life – a random encounter in the streets can be a leading motive for a new painting. It can be a tiny detail of a person, their clothing, appearance or confident posture, she meticulously transcribes onto the canvas.

She describes this process as a way to capture Cool and the often unnoticed. Originating and developing throughout West-African and African diasporic cultures, the term Cool is a tool to take control over one’s body and narrative, for instance via fashion or attitude. It is the translation of the need for agency, stemming from a lack thereof. Zamblé found an inspiring example of this at home, in her grandmother’s portrait. The portrait is reminiscent of a typical West-African photo studio setting, which often uses a blocked black-and-white backdrop. She is smiling friendly, but with a distinct sense of authority, unmistakably claiming her moment and place in the photo, but also in history.

Zamblé draws up a narrative all the way back from her grandmother to the here and now, celebrating and promoting black people taking agency and claiming space. In doing so, she creates works aimed to change our perspective on normativity within the arts. 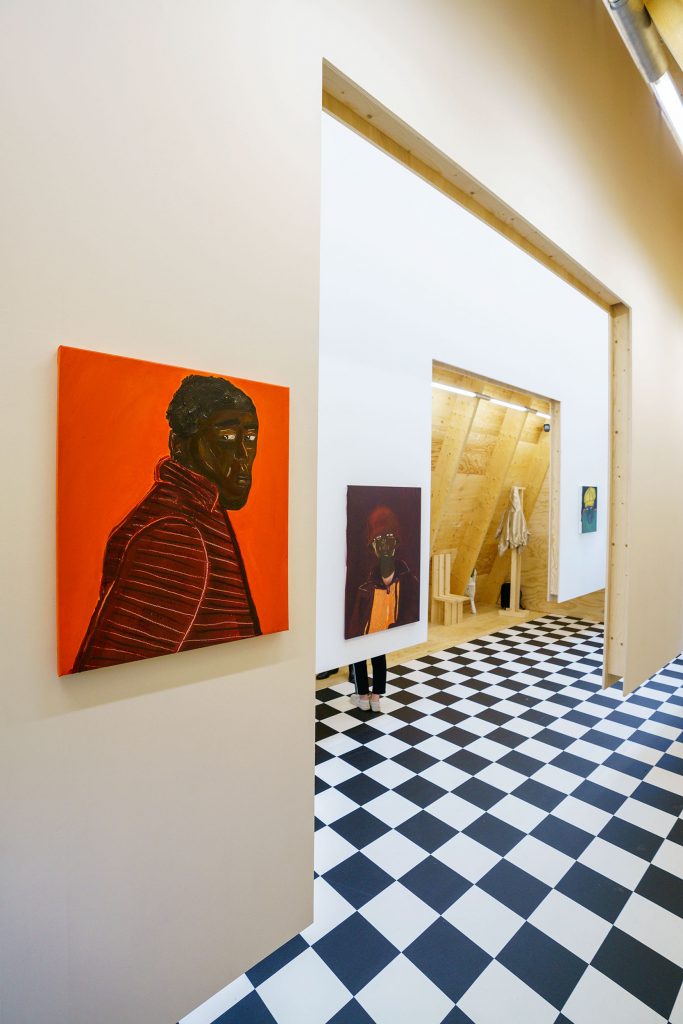 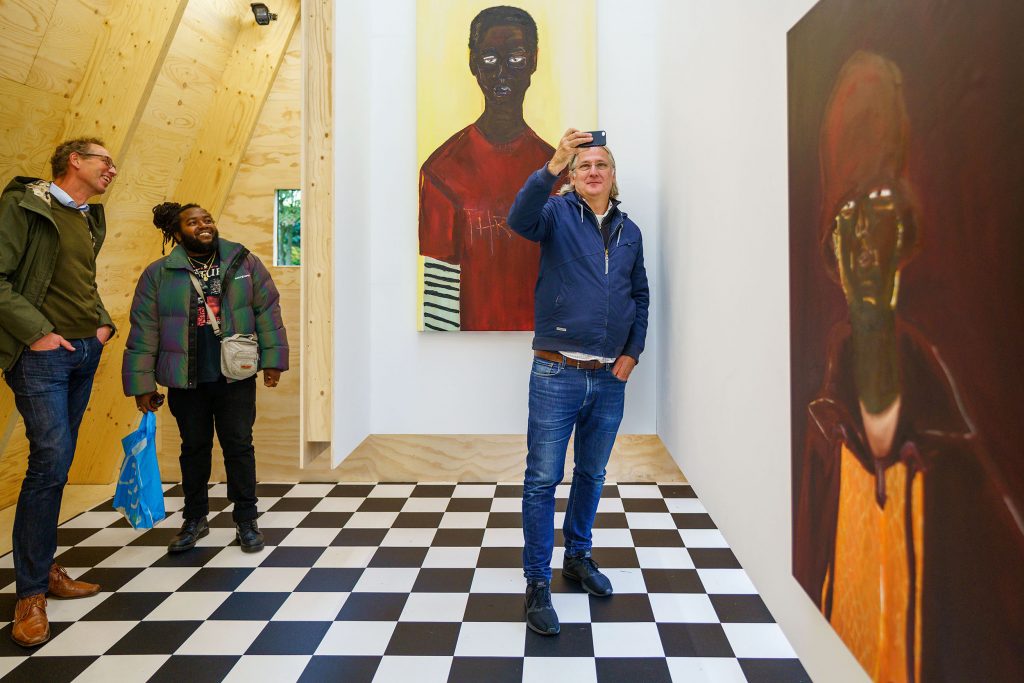 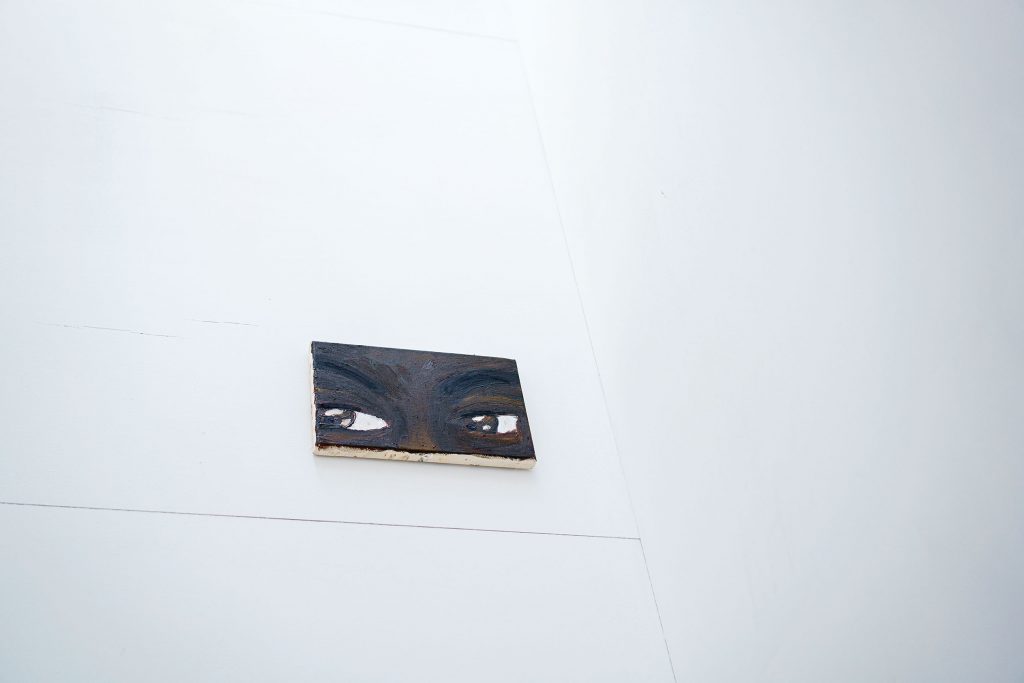 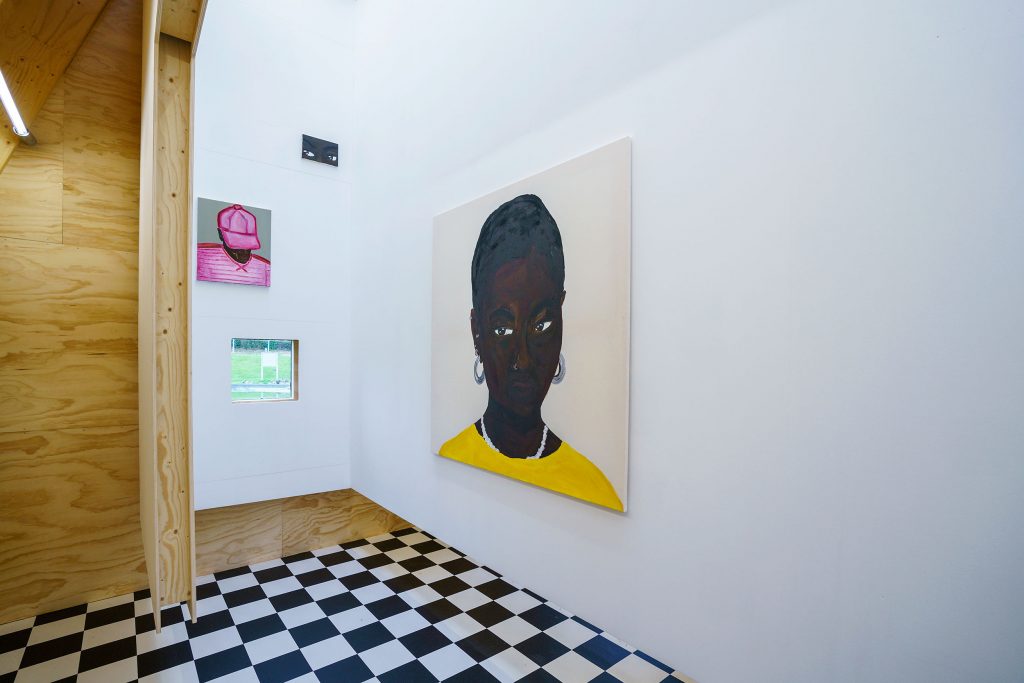 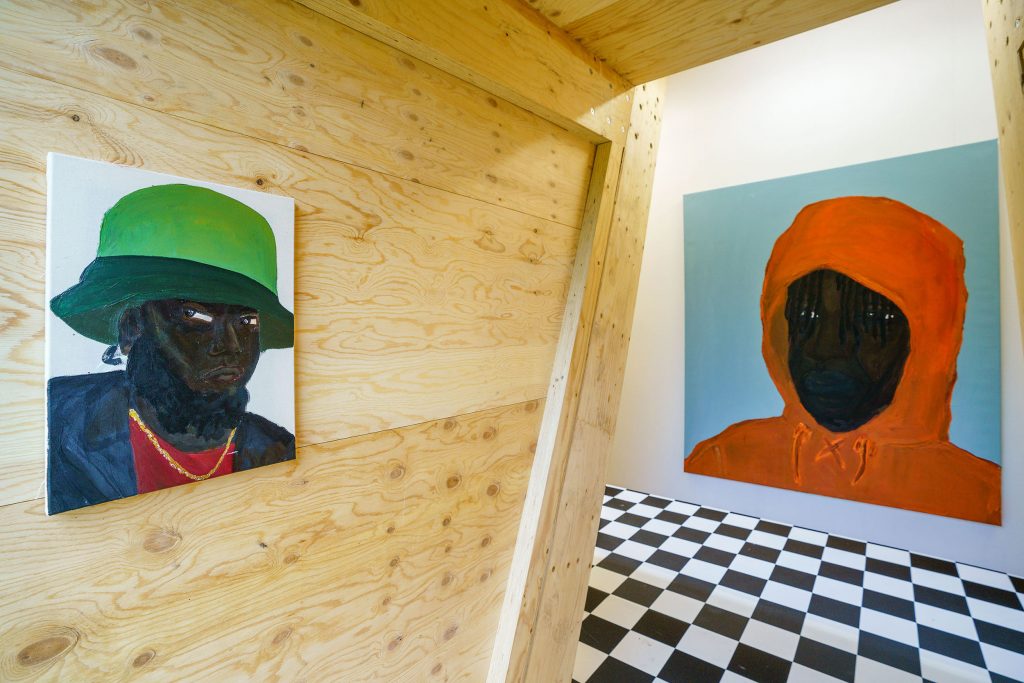 In her works Valentina dives in the world of (sub)cultures that are mostly shielded from the rest of the world and becomes one of them. For example, she has won a dog race with her Irish Softcoated Wheaten Terriër, worked at a wellness center and formed a ‘fursona’: a physical or virtual alter ego associated with a furry animal. Gal sees an analogy between the perfect simulations that those worlds have to offer, and the way people completely lose the connection with reality. With the information that she picks up in these places she creates works like hairy sculptures, installations of traditional statues and ornaments and digital constructed videos. In her installations the line between real and fake, between subject and object, fades.

Being an avid gamer, Valentina Gal is all too familiar with the customs of online communities. Via platforms such as Twitch or Reddit, she researches online subcultures, such as the furry fandom, cosplayers or Vtubers. The internet offers a relatively safe space for them to express themselves, and at the same time provides a low threshold for others to express criticism, typically called ‘flaming’. The avatar is a central element in this balancing act of online freedom and critique. A live filter allows streamers to modify their appearance in such a way that they are at the same time anonymous and have a unique hybrid digital personality. ‘The brightest Flame casts the darkest Shadow’ can be read as such an Avatar – a filter overlaying our physical space that shines light on the online world of streamers, while at the same time revealing its shadow sides. 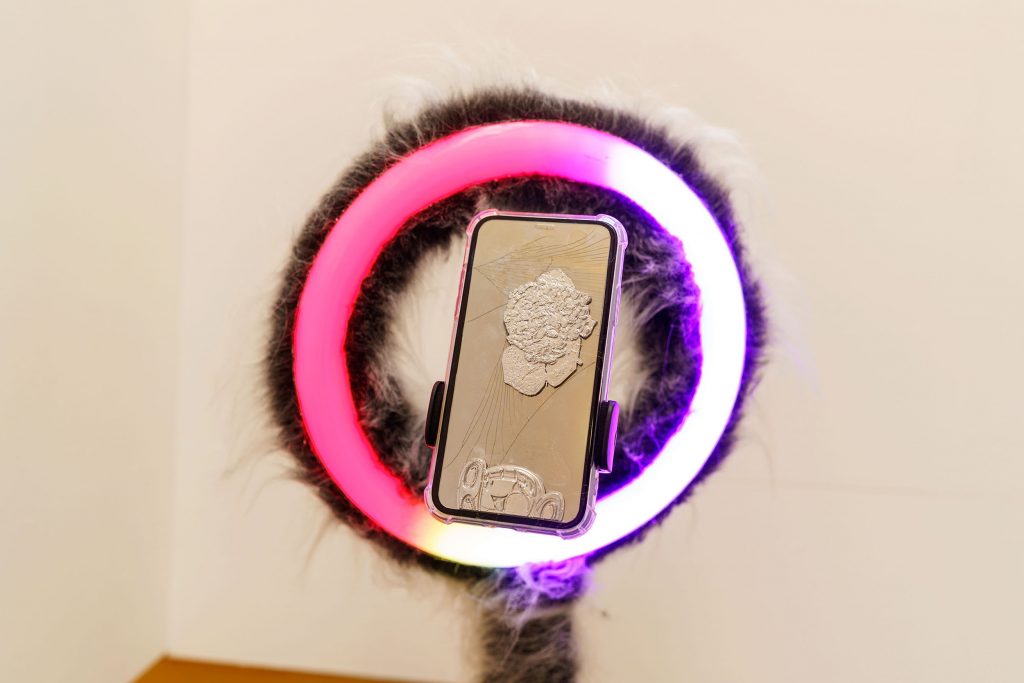 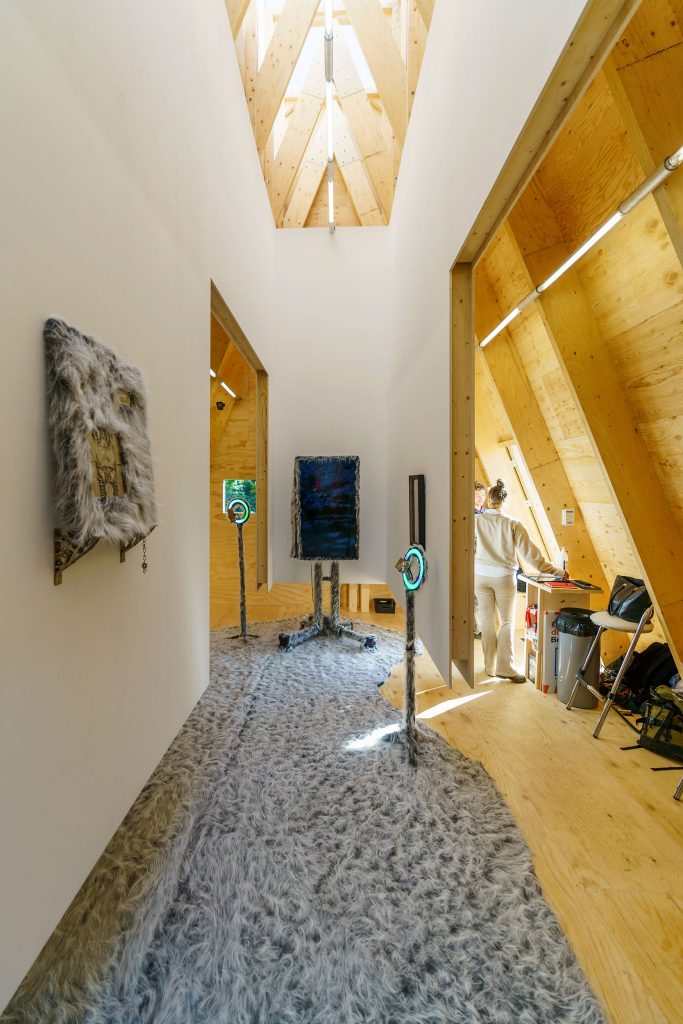 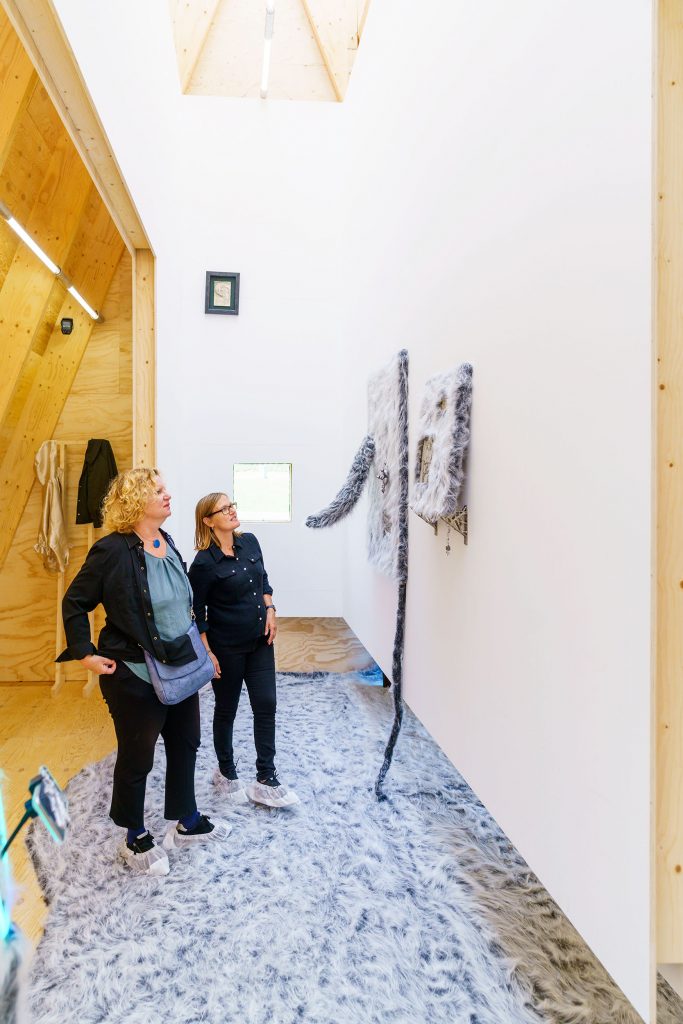 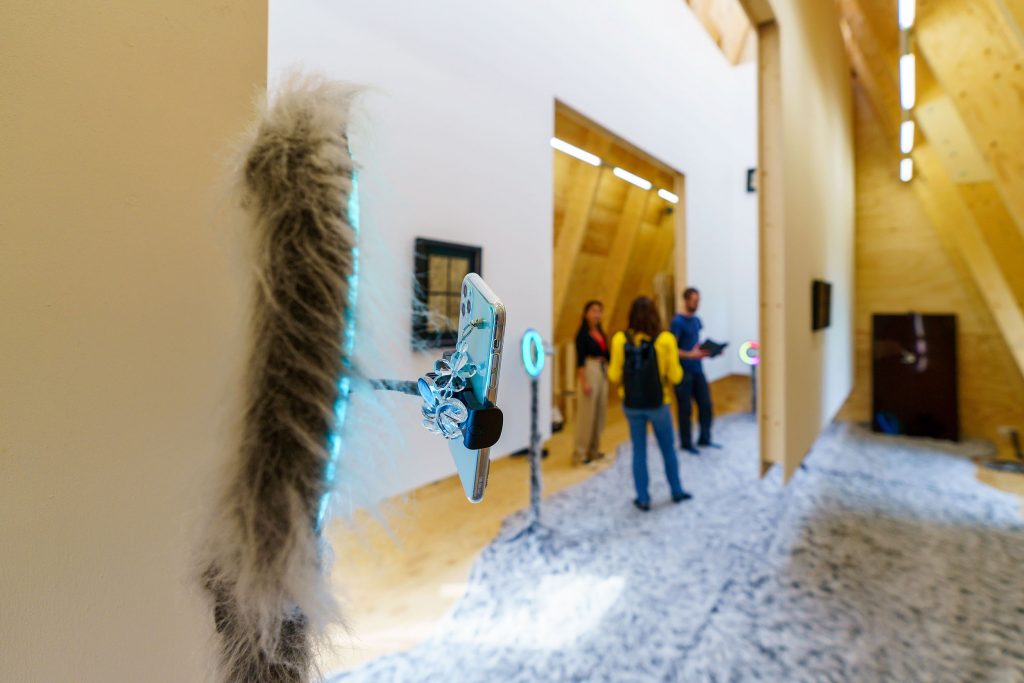 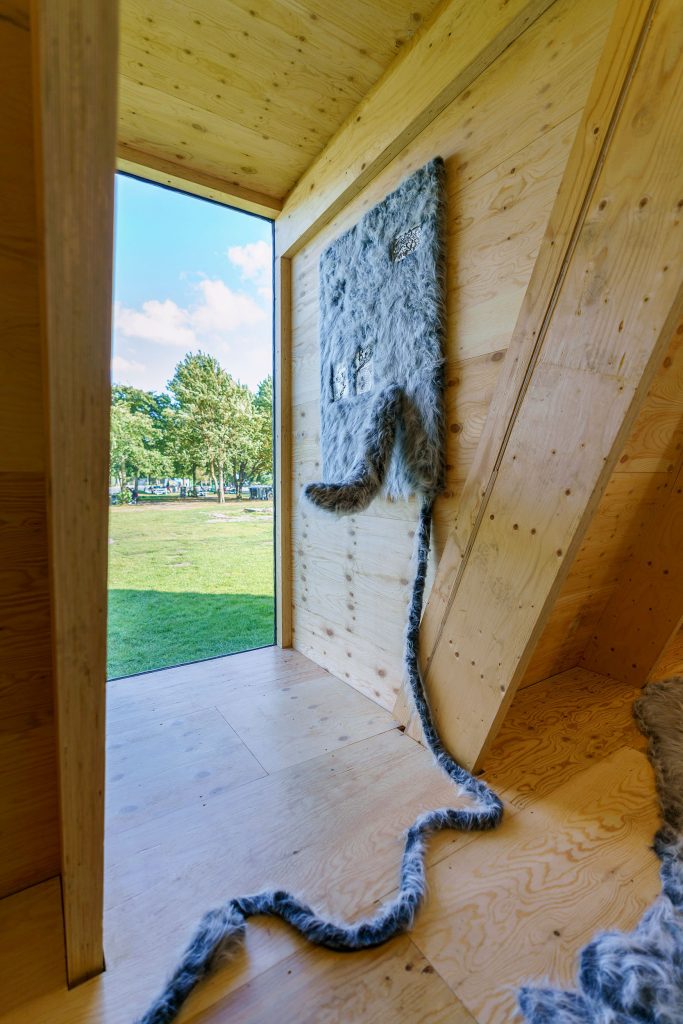 For our opening show, we’ve presented an all-new solo-exhibition by artist Arash Fakhim (’87). Transcending between different media and cultures throughout his life, Fakhim takes a particular interest in time, memory and the marks people leave on their daily surroundings. His recent works are increasingly personal recollections of home, gathered on seemingly banal materials.

In Curtain strokes and lavender scented candles, an old curtain becomes the testimony of a past life, imprinted in light, sewing and stains. Time becomes a tool to make works of art. Fakhim reflects on this by using printmaking techniques like Cyanotype, where the natural light of the sun transcribes found objects on textiles. These textile works are sewed together into larger tableau’s, for which the artist worked together with his mother on a series of rugs based on his childhood drawings. Like the sun leaving an imprint on the curtain, objects passing through Fakhim’s hands are instilled with traces of memories and a sense of belonging, past and present. 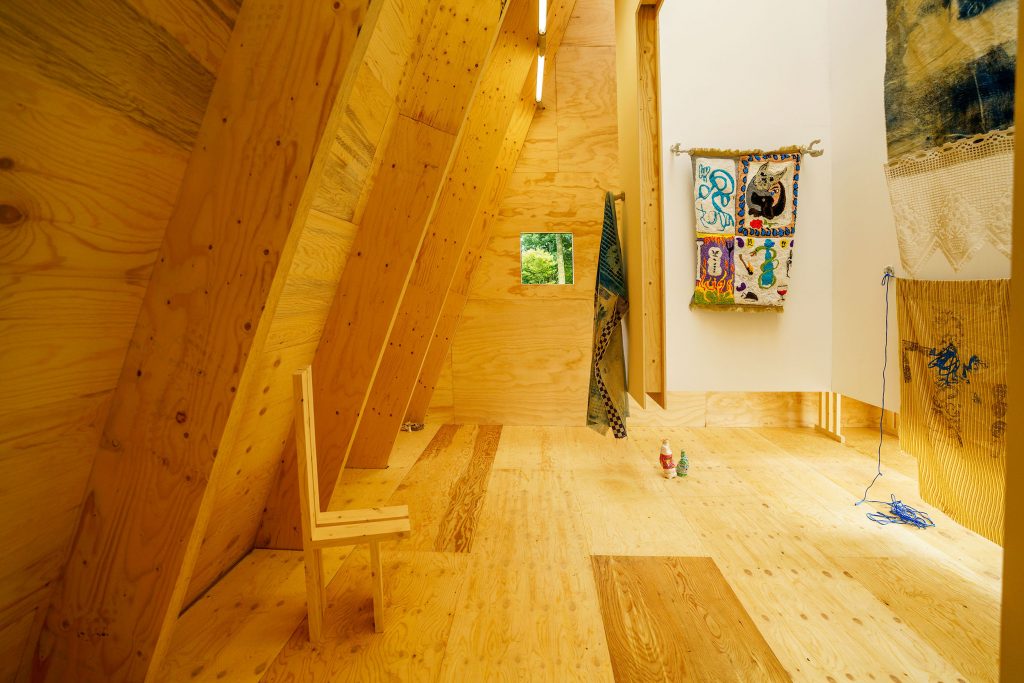 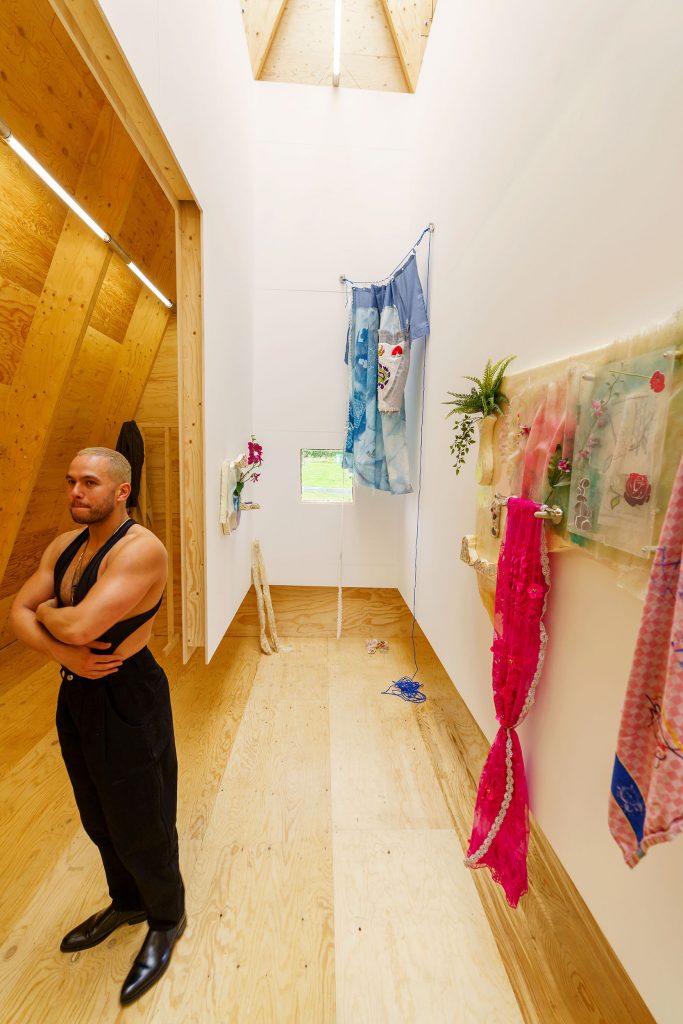 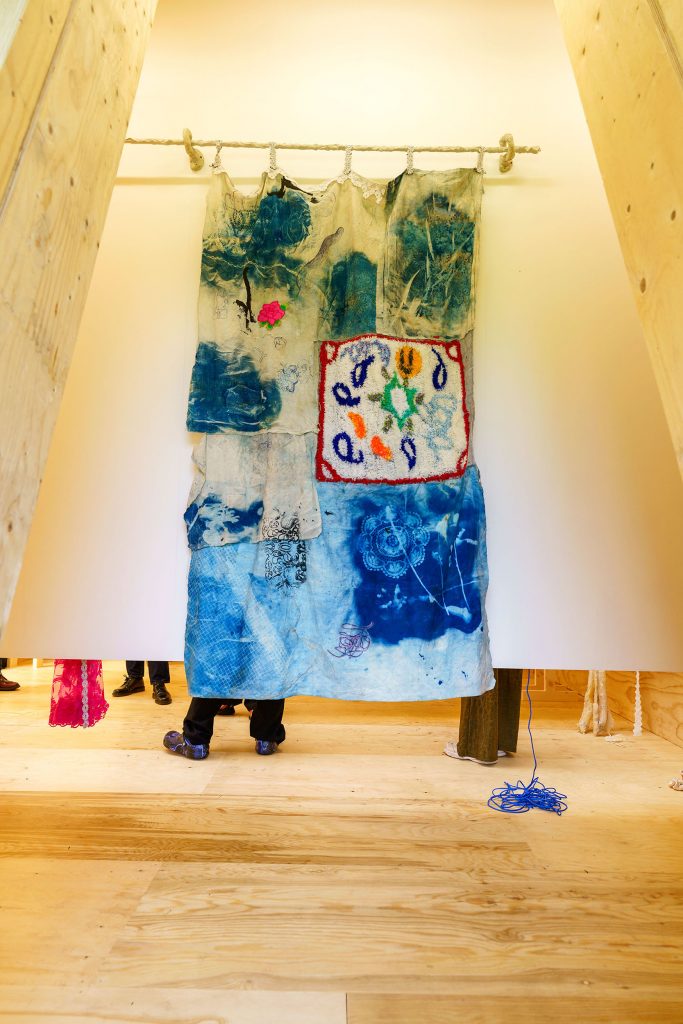 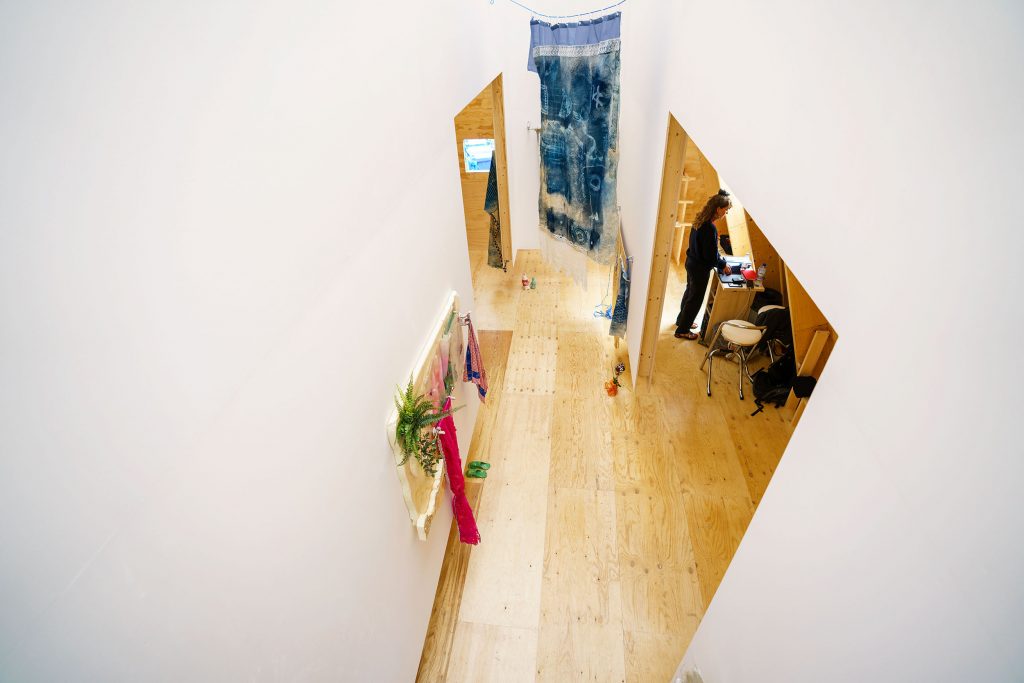 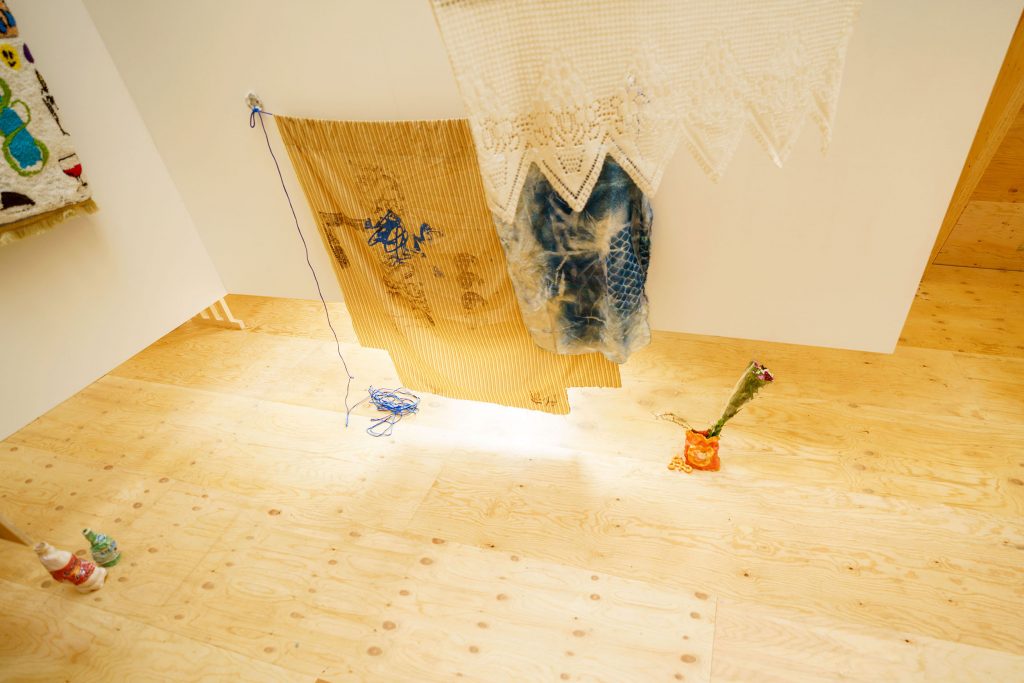 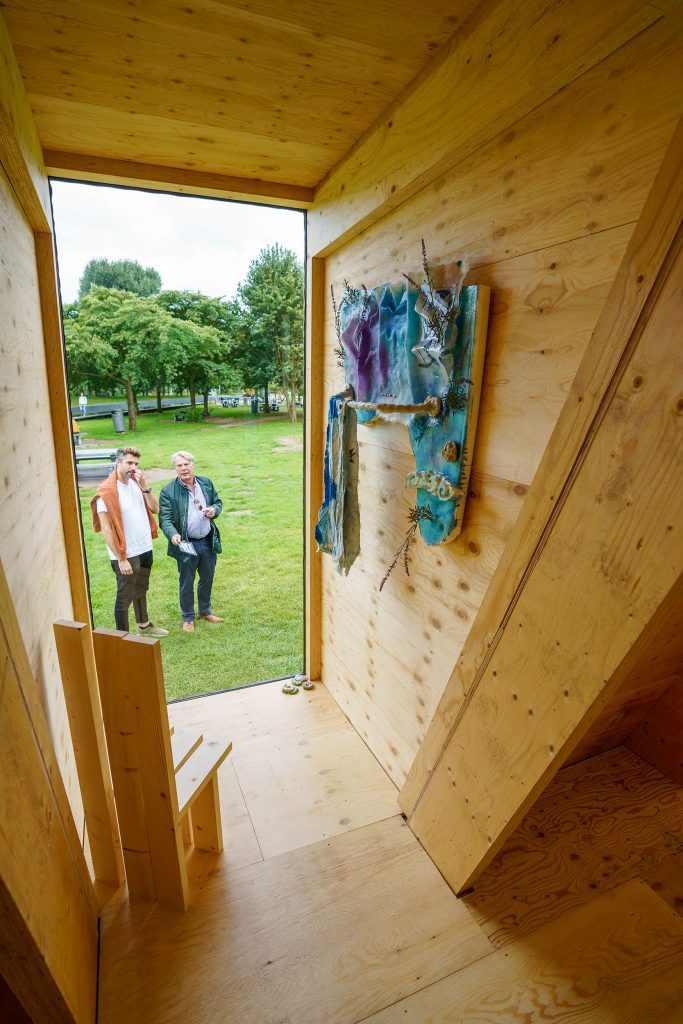 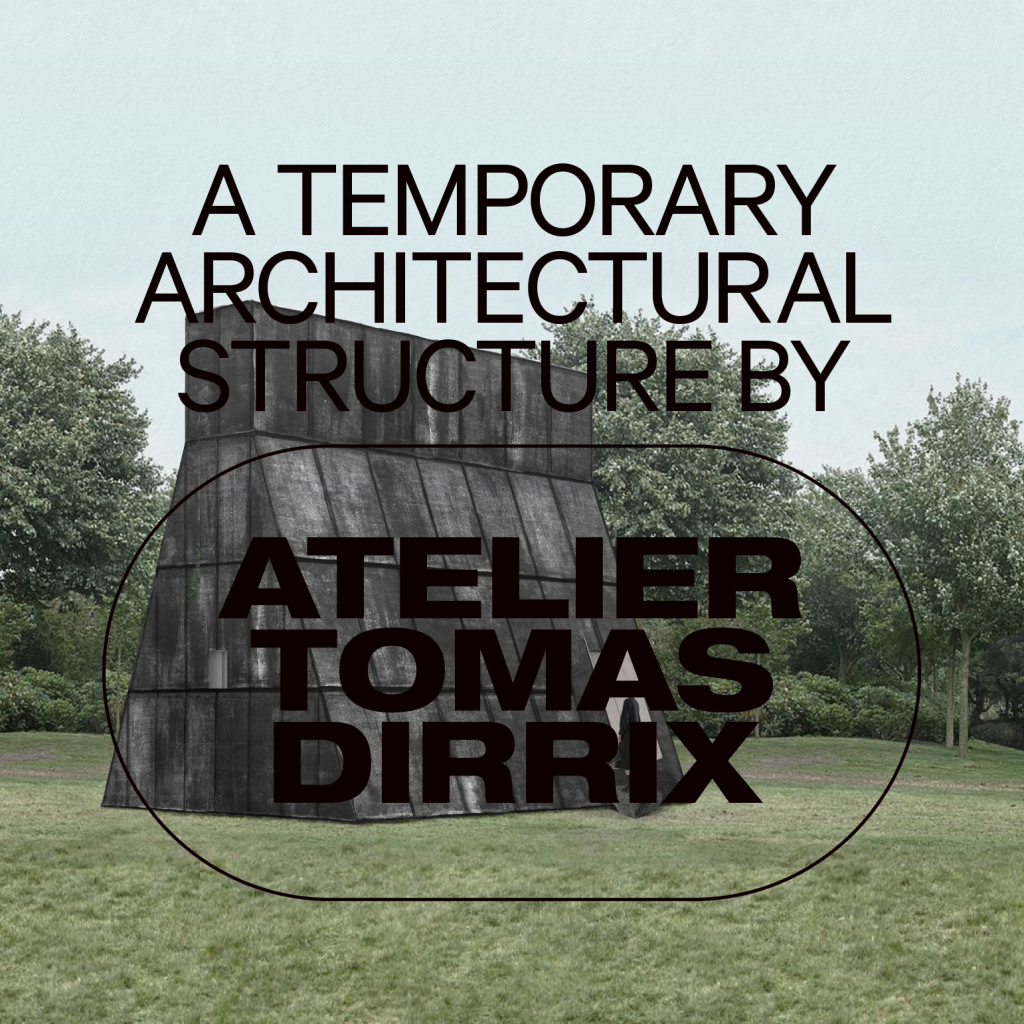 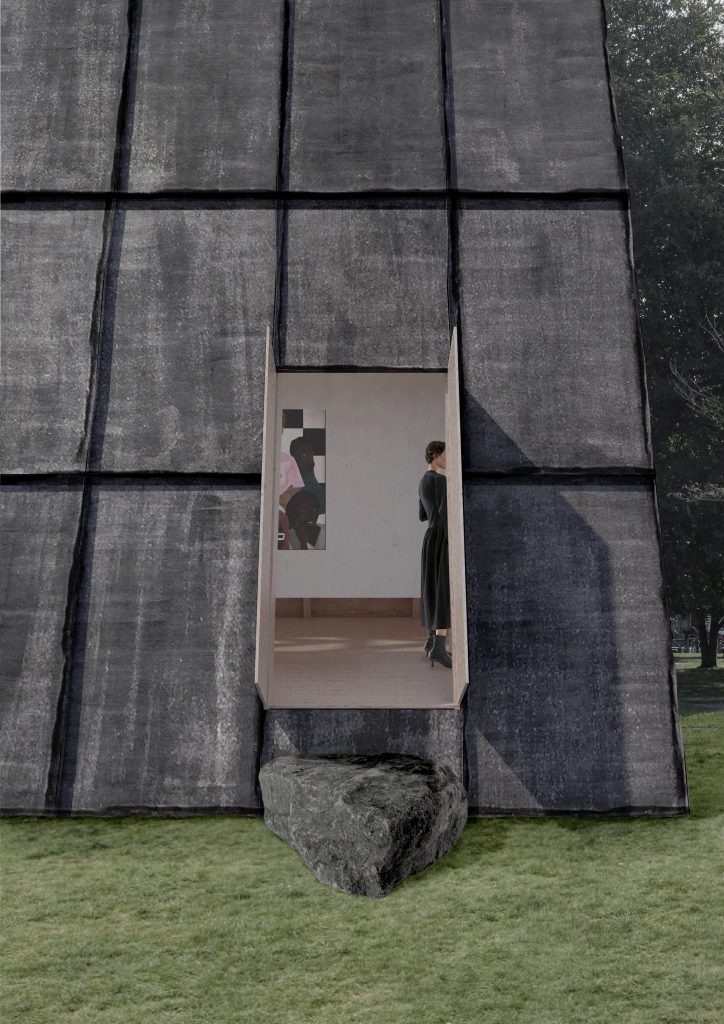 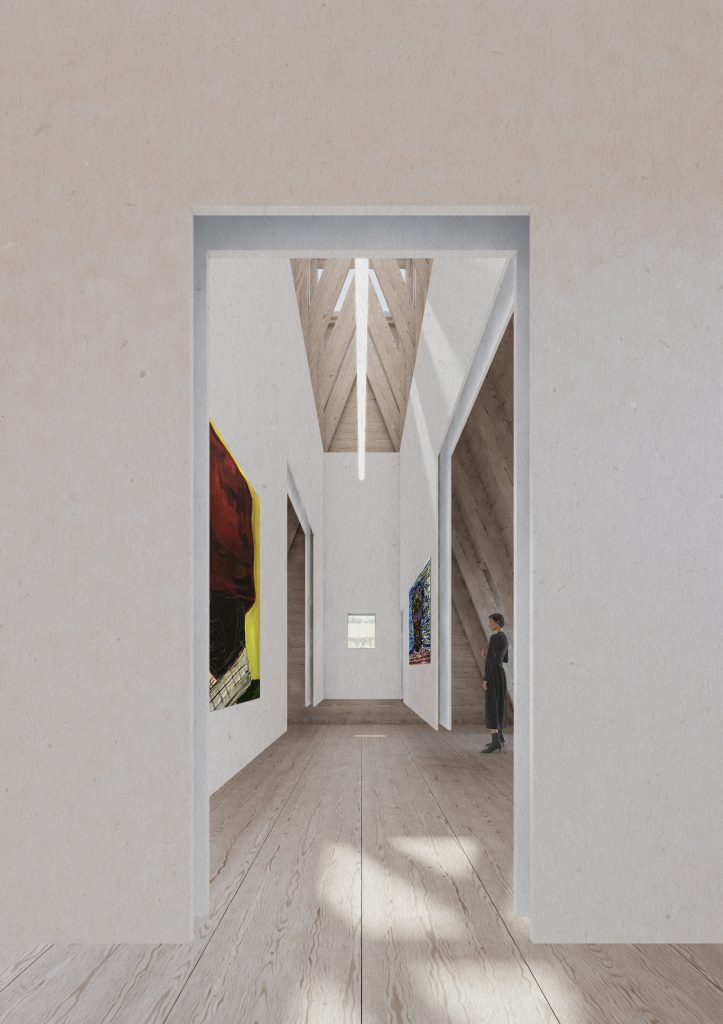 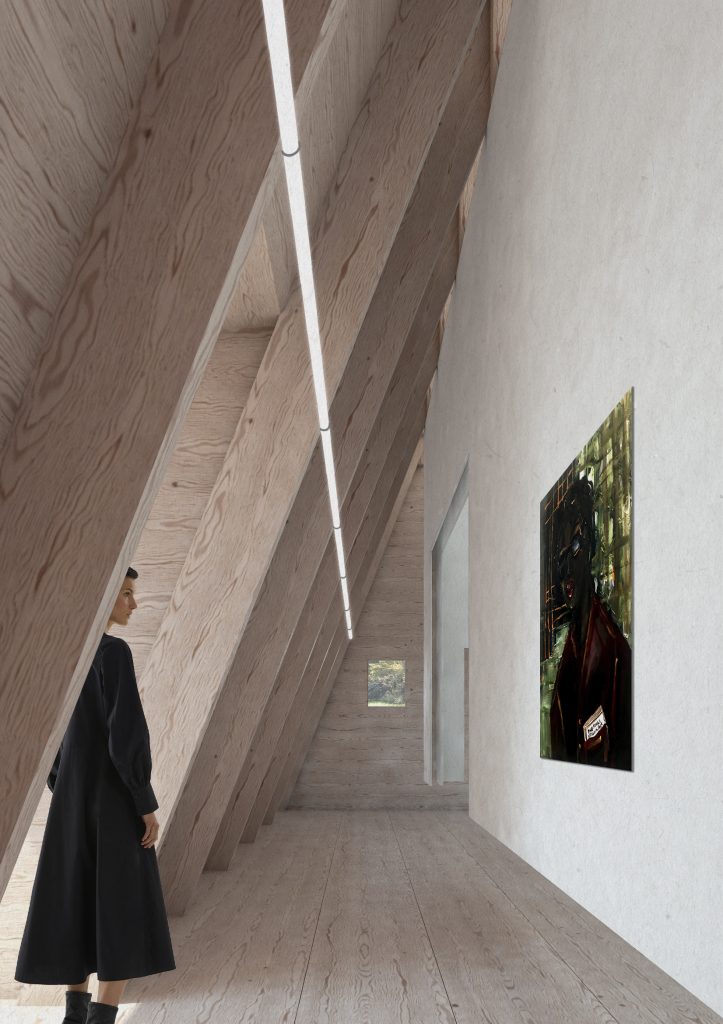 Contemporary art has played an important role in the development of the Westerpark area. Unfair™ again creates a new space for visual art in the area – bringing an ode to the creatives who, as early adopters, stood at the very base of the development of the area. In the design for the pavilion, Dirrix focused on defining an exhibition space in relation to the public domain. His design emphasizes the park with different glimpses in – and out – bringing together the personal and the public space. Dealing with a very limited visitor capacity, Dirrix aimed to define a space that partly uses the typology of a house, an art chapel and a one-visitor-at-a-time-museum.

The project tries to define the possibilities of architecture through a degree of precision and ingenuity. While the height of the structure brings grandeur, the archetypal slanted shape radiates homeliness. The design and its cladding reflects on Westerpark’s long and rich history, transitioning from heavy industry to heavy leisure in the last 20 years. In doing so Dirrix engages with history, translating it into the now.

Atelier Tomas Dirrix
Atelier Tomas Dirrix is an architecture practice based in Rotterdam. Dirrix founded the studio in 2017 after winning the Meesterproef competition for emerging Belgian and Dutch Architects. From that moment on they worked on multiple projects together with cultural and governing institutions, private parties and real estate owners. They have done projects such as Collectible Design Fair, Brussels, Huidenclub and Room under a Roof, Rotterdam. Tomas Dirrix graduated from the Master of Architecture at the TUDelft, won the Unfair Architect Award ’17-’18 for which he designed the biennial exhibition featuring work by 40 promising artists and received the Arc18 Young Talent Award.

From 1883 the London Imperial Continental Gas Association operated the Westergafabriek, for the supply of gas for the city lighting of Amsterdam. They hired the Amsterdam architect Isaac Gosschalk (1838-1907) for the characteristic industrial design of the area. In 1898 the Wesstergasfabriek was taken over by the Municipality of Amsterdam. In the 1960s, gas production declined, until gas production stopped completely in 1967, partly due to the discovery of natural gas fields in Groningen.

After the closure, a heavily polluted site remained. After the Municipal Energy Company used the site as a storage and workshop, from 1992 onwards space was made available for culture for the first time, by temporary letting artists and adventurous entrepreneurs use the area. A cultural destination and development is thus set in motion. In 1999, Meijer Aannemers Bedrijf took over the entire site for a symbolic amount, on the condition that the area should be redeveloped into a city park with a permanent cultural destination. The park opens in its current form in 2003. In 2018 a new consortium under the wings of Lisca and Duncan Stutterheim bought the area from Westergasfabriek B.V.